skip to main | skip to sidebar

This week we managed to yack out two hairballs, one each. Here's Zoe to tell her story:

Yeah, so I was sleeping on the windowsill in the bedroom when I woke up due to some stomach gurgling. I knew this was going to be a good one since I felt pretty bloated and my stomach was rock hard. First thing I did was saunter as quickly as I could into the livingroom where the humans were sitting, eating dinner. I positioned myself at an angle right in front of the TV so they could both watch me. It was classic! Even Simba high-fived me afterwards!

Anyway, so I spread out my legs and hunkered down for a good yacking position. After some heavy heaving that would put any sorority girl to shame, I managed to yack up a nice black hairball that was so big, it separated into two sections that criss-crossed each other nicely as they fell to the floor. I was pretty proud of this one...it was HUGE and looked like poo!

Instead of running away in "fear" (yeah, like we're really afraid LOL), I nonchalantly walked away. I passed a side-long glance at Girl. Her mouth was stuck in the "duh" position - she was speechless! Both humans froze for a few seconds before one of them managed to get up and remove my piece of art.

On a scale of one to five, I give this hairball Five Kibble!

Since Simba is now sleeping in MY box, I'll tell you about his hairball of the week. Since he's been an ass to me lately, I've refused to lick him. He can lick his own damn orange fur clean! So you can bet your catnip he had a nice juicy one worked up.

This morning just before the humans woke up, we discussed where he should deposit it. And we knew the perfect place! You see, almost every morning Girl gets up early and moves to the couch and sleeps about an hour. I guess it has something to do with the firetrucks, piercing rising sun, and other noise just outside the bedroom window looking onto the street. It's like heaven to me, but whatever! Humans are so freaking sensitive.

Anyway, we took some measurements the other morning and calculated exactly where Girl would step when she walks to the couch. Yeah, you know what I'm talking about! Just as the alarm clock was going off, Simba yacked up his soggy orange hairball in the perfect place: about two inches from the front of couch. *MEOOOOW MEOW MEW MEW MEW!*

Sure enough, Girl stepped right into it this morning. And the best part?? She was TOO TIRED TO NOTICE! It wasn't until she got up 45 minutes later that she said, "I think there's something wet over here."

OH MY GAWD life is so perfect!

I give this hairball Three Kibble for quality, but Five Kibble for placement! Way to go Simba!
Posted by Unknown at 8:48 PM 5 comments:

What is this Halloween thing?

Our memory is pretty short so we really don't remember much past last weeks food allotments (which was pretty small - humans are so damn stingy). Anyway, apparently tonight was some sort of "dress up and scare the little kids" night. At least that's what we heard boy-human saying. It really took us by surprise. I mean, he had this THING on his face! It really scares the crap out of me. I don't like it and don't want it around. 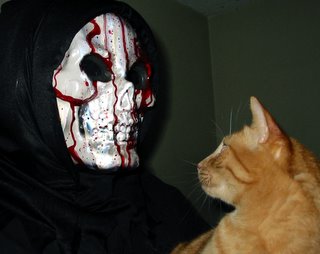 I hate this mask. It scared the hairballs right out of me!

Zoe didn't care for it much either. She was smarter than me though. Whenever she saw boy-human with the mask, she would run away. Damn her and her sleek, fast moving body!! I can never get away, I aways get caught! 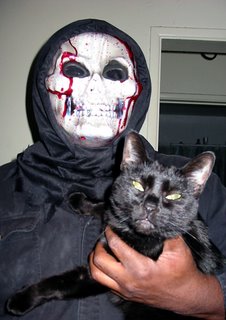 Here's Zoe doing her world-renowned impression of "A Cat that Doesn't Want To Be Picked Up." Note the positioning of her legs as she's getting ready to push off his chest.

She is so athletic. I hate her! I must go bite her now.

I thought it was weird how he kept saying how much he likes kids and thinks they're cute. If he likes them, why did he keep scaring them? I just don't get humans. They're so complicated! Speaking of humans, Girl put clothes on us!! YEAH! I'll load those pics later. I just saw a can of catfood being taken from the fridge.

Food always takes precedence over blogging.
Posted by Unknown at 8:17 PM No comments:

WE GIVE YOU FOUR NUBBINS OF FURY!
Posted by Unknown at 9:56 PM No comments: 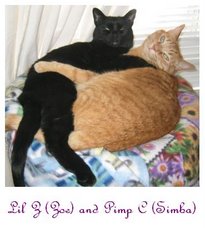